The letter of appeal is a business letter and must be concise and well-written. Before filing your request, take some time to consider your choices and gather facts. This will help you analyze and plan your case. When you file a letter of appeal, you have to show that the decision you appeal aligns with the conditions for an appeal. An apparent disparity or displeasure of the verdict is generally not adequate to justify a request. If you don’t have a compelling excuse to appeal, it might be a waste of your resources.

If you believe that you have been handled poorly at school or work, knowing how to write an appeal letter might benefit you. The letter of request should highlight the case’s specifics rather than serve as an emotional plea. You may feel very passionate at the moment, but you must stay rational and competent in your writing.

What Is an Appeal Letter?

The letter of appeal is a document written to somone or an institution that you would like to rethink their decision in situations where you believe that you have not been warned adequately of anything or that you have been handled harshly. An appeal letter can be used in several cases. Writing a letter of appeal does not have to be as challenging as you think it is. One instance where you may want write a letter of request includes the appeal of a decision relating to your profession where you have been terminated on a biased or unprofessional ground.

Types of an Appeal Letter

There are various types of appeal letters depending on what decision or action you want to appeal.

Below are some of the kinds of appeal letters and their definitions:

An appeal against redundancy

Redundancy is a form of release from the workplace. This occurs if companies need to reduce their staff. As a staff member, you can appeal against being named redundant if you feel that you have been wrongly chosen or that your employer has not followed a fair redundancy process. You should consult with your manager first to check whether they have an appeal process. If they don’t, you can explain to them why you feel the redundancy is wrong. It’s a smart idea to seek support from leaders of workers, such as labor unions, who might be able to accompany you to any hearings that your boss may

have set up. You could also request a senior team member who has not been included in the redundancy review process to help with the appeal.

An appeal against an employer decision

There are several reasons that you may feel you need to write a letter of appeal for financial assistance. Most likely, this will be due to an abrupt change in your economic condition. You may need financial aid in cases of unemployment, medical issues, or divorce. In short, The main reason for writing a financial aid appeal letter is to ask for help.

An effective SAP appeal often provides details as to why your academic status has transformed, you have dropped out of classes or failed to sign up for relevant courses, or did not reach your school’s expectations. When you complete your SAP appeal, collect material such as health records, financial documents, family accounts, and communications with teachers, colleagues, and peers that might be important. You should also send a personal letter to the SAP committee, which recognizes that you have not followed the SAP requirements, that you understand what has happened, and that you will take action to fix this issue.

An insurance appeal letter requests an insurance company to reassess a decision that denied benefits or payments. The insurance provider must notify you of why your application has been rejected, your right to appeal, and the existence of the Customer Assistance Policy (CAP) if your state has one. Internal assessments must also take place within a fixed time frame. A review of treatment that you have not yet obtained, for example, must take place within 30 days of the order for review.

Students who are released from college due to low grades may have faced conditions that led to their grades’ decline. It is a good idea for a student to write an academic appeal letter in such a situation and planning a face-to-face appointment with someone in the Academic Appeals and Compliance

Department. It is essential to be truthful, not accuse anyone of the circumstance, describe the strategy for returning to school, and excel if given a second chance.

An appeal against a warning

An employee writes an appeal against a warning within a reasonable period opposing the notice. You have a right to appeal against an action your boss took against you after a disciplinary hearing. You may do this if you believe the action is inappropriate or unjust.

An appeal against dismissal

Being discharged from your job is one of the most distressing things that can happen in the workplace, particularly if you do not believe that the decision is fair or that it has come suddenly.  You should receive a letter from the Organization confirming the decision to release you. An appeal against dismissal letter should include information on how to appeal, the timeframe for appealing, and whom to submit the request to. If you have received nothing in writing, review the Employee Handbook. If nothing is clarified there, we advise that you write to the individual who discharged you within five days of getting a termination decision.

How to Write an Appeal Letter

Write a professional appeal letter in the usual business format unless advised to fill out the online appeal form. This begins with the message’s date, the recipient’s name and address, the greeting, the letter’s body, and your signature with contact details. Address your letter of appeal to the person who has the power to approve your plea, which is usually the director of the department or the company’s executive. For purposes of secrecy and expediency, do not answer the letter “To whom it may concern.”

Successful letters of appeal state the legitimate explanations of why a decision should be reconsidered. Persuasive letters of appeal describe the errors committed by the authorities overseeing the case. Introduce any additional facts that could have modified the original opinion.

In the next few sentences, elaborate on the grounds of appeal. Note days, times, locations, and witnesses who can validate your claims. Provide a list or timeline of events if it serves to clarify the circumstance or the reasons for your appeal.

Successful letters of appeal are well-founded. Describe any attached documentation or signed eyewitness accounts that confirm the claims of request or pose questions about the validity of the original ruling.

Mention what you expect will happen. Specify whether you are asking that the original decision be changed or entirely reversed. If there are multiple potential solutions to the issue you are facing, suggest which solution is more appropriate. Show appreciation for the acceptance of your letter of appeal.

I hope you’re well. I am writing to appeal your verdict not to extend my annual wage boost, which we addressed at our annual review meeting last Wednesday.

As you said at our discussion, you felt I was too late to work many days this year to justify a salary raise. According to my reports (which I got from Human Resources), I haven’t been late more than twice this year. I also added the Human Resources folder, indicating my absences.

I urge you to rethink your decision regarding my salary rise, given the evidence.

Thank you for your time and for going through this letter and the attached file. I am willing to see you at any time to discuss this further.

A letter of appeal is something you write if you think you have been handled harshly in a manner in your company, and you wish to request somebody to rethink the decision they have taken about you. There are some occasions you may need to write a letter of appeal. Maybe you feel that you were wrongfully cautioned, demoted, cut off, or released. You could have been denied a raise, and you think you deserved one. If this is the case, a well-crafted appeal letter can work wonders to fix the situation.

We have several easy to follow templates on our website that will enable you to write perfect appeal letters. Feel free to download the templates and give them a try. 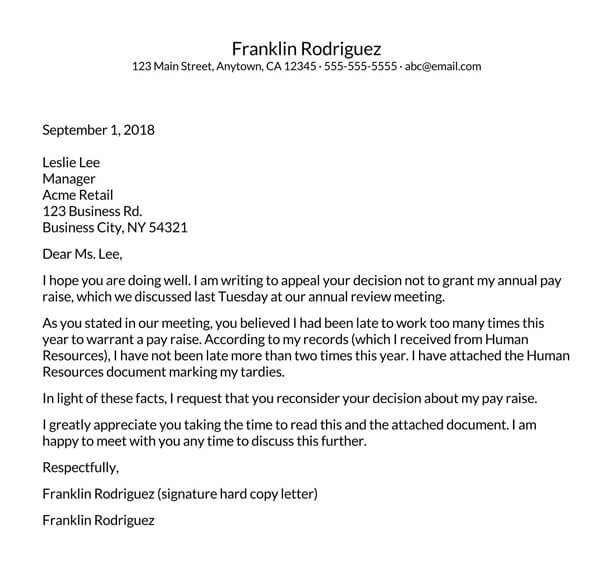 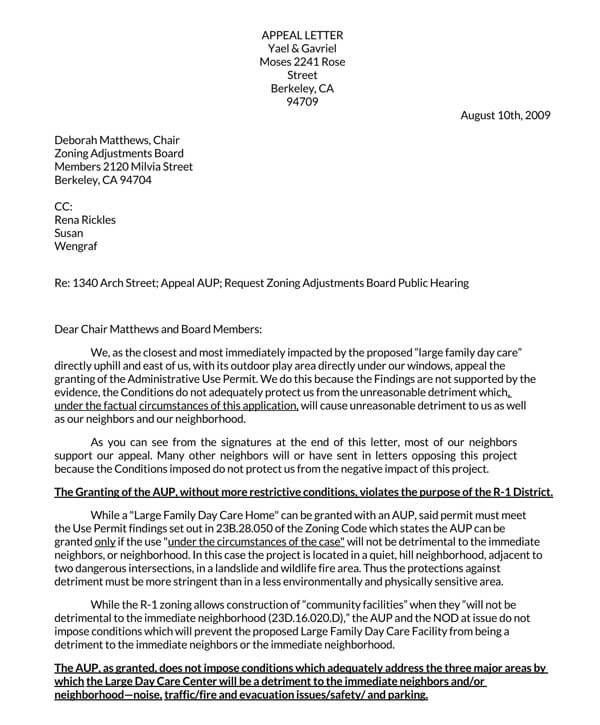 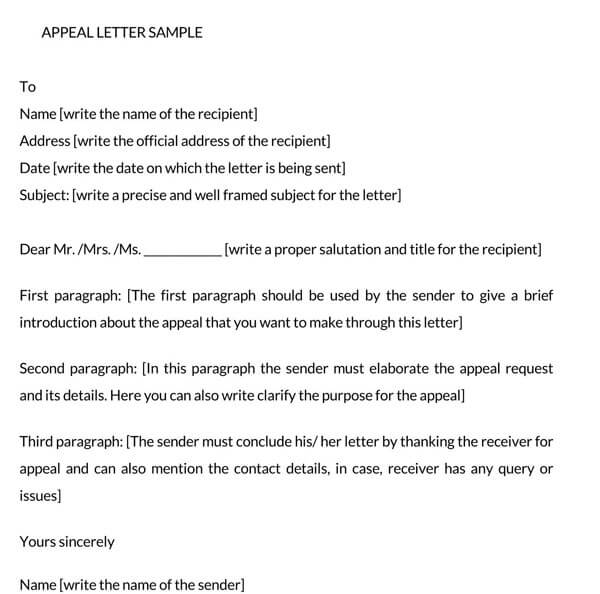 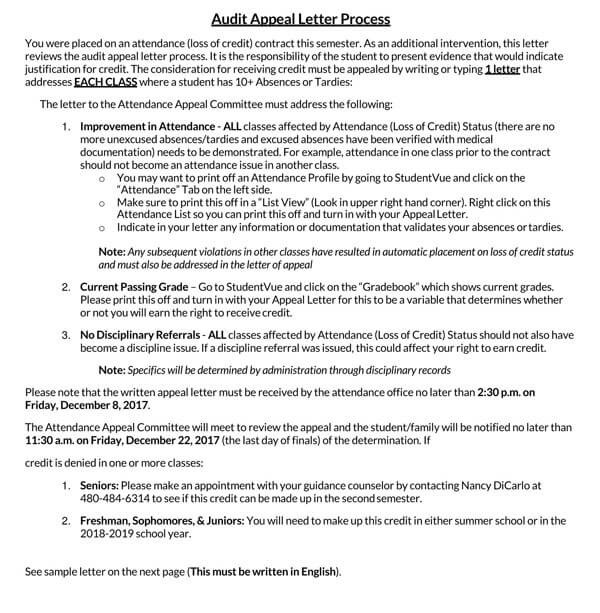 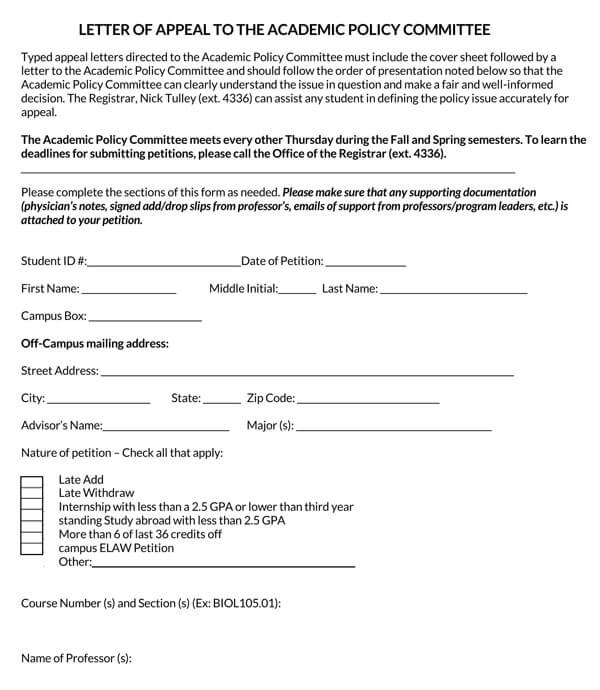 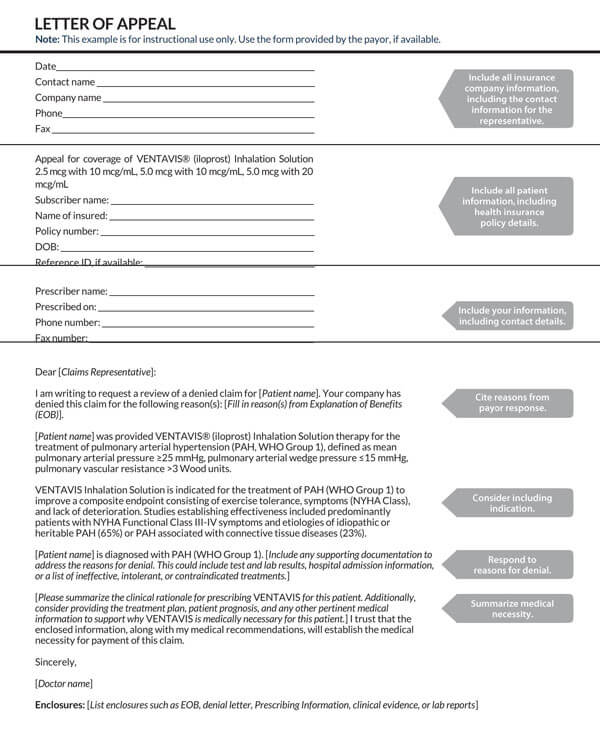 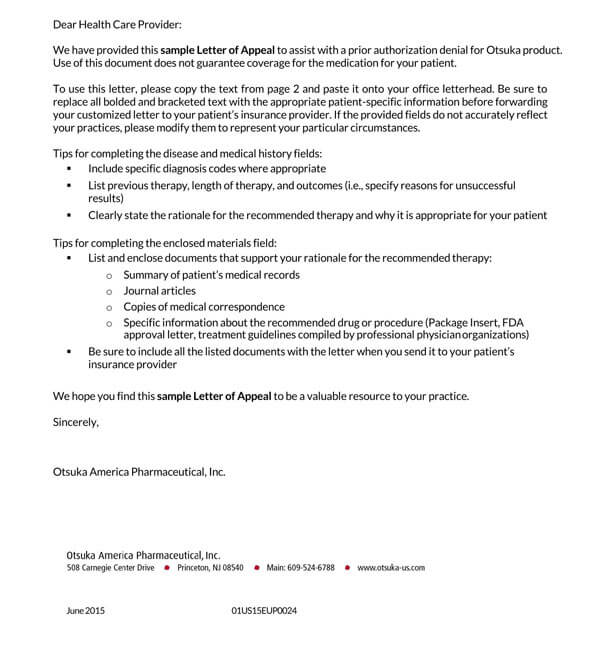 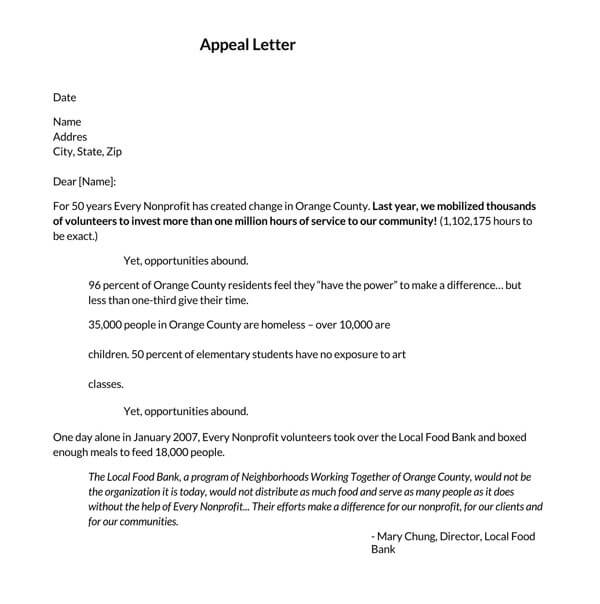 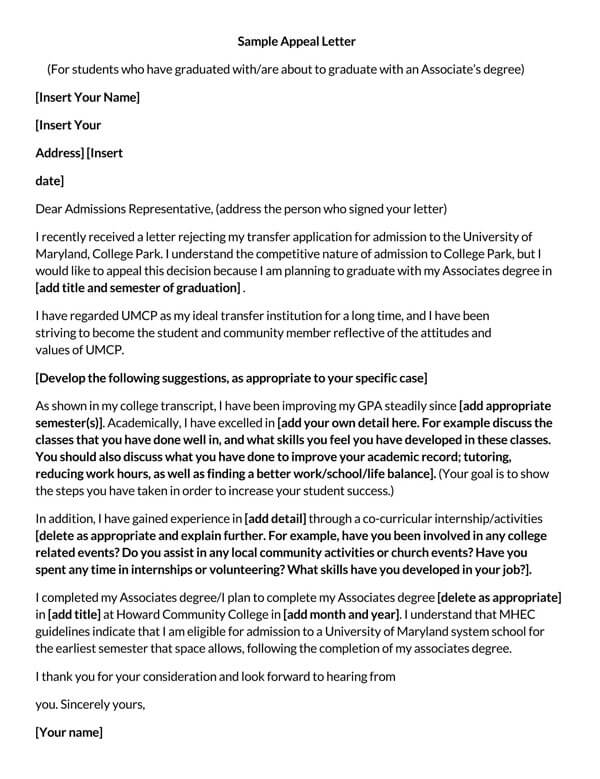 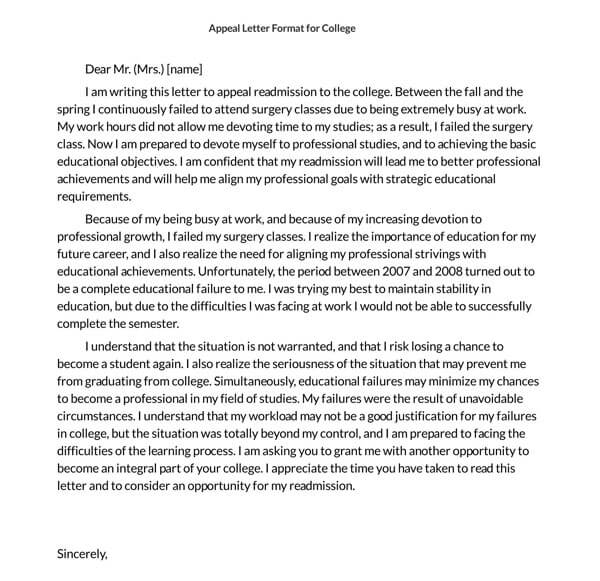 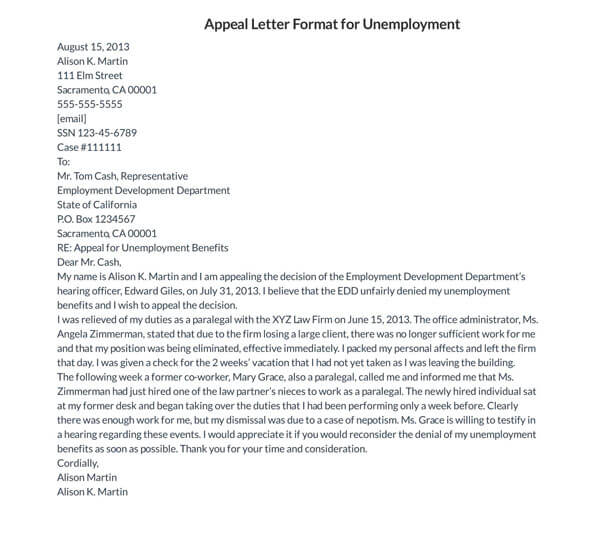 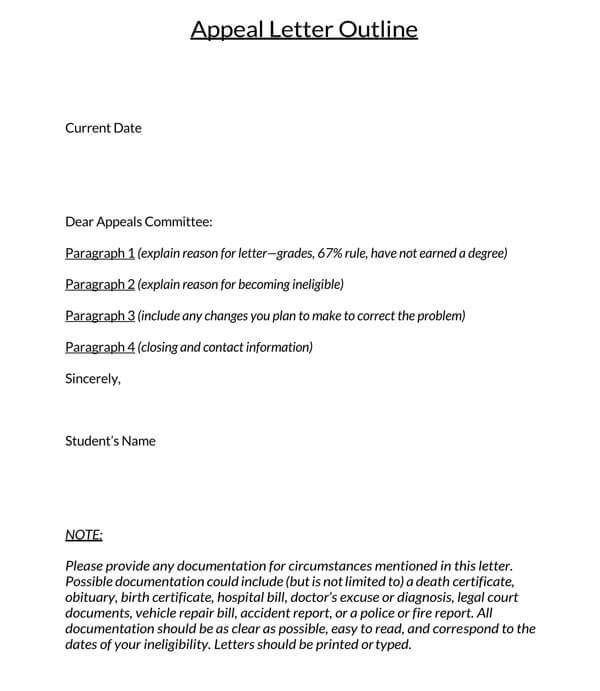 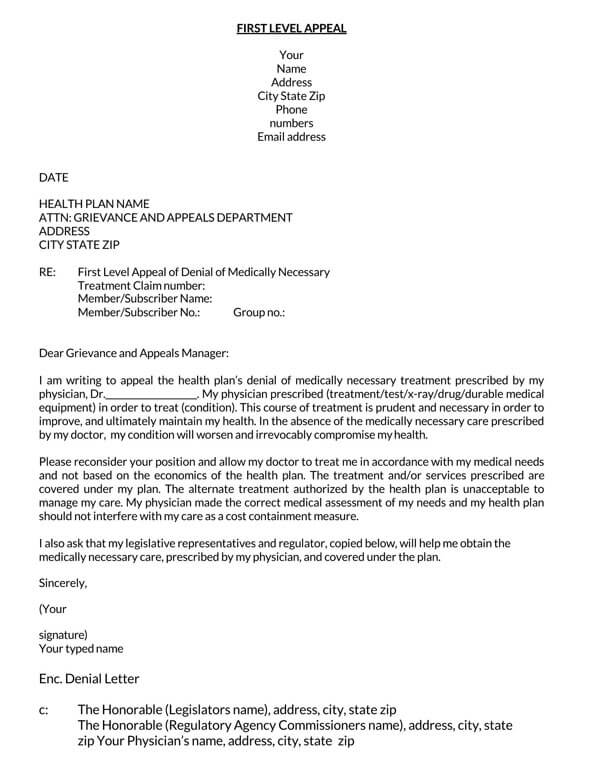 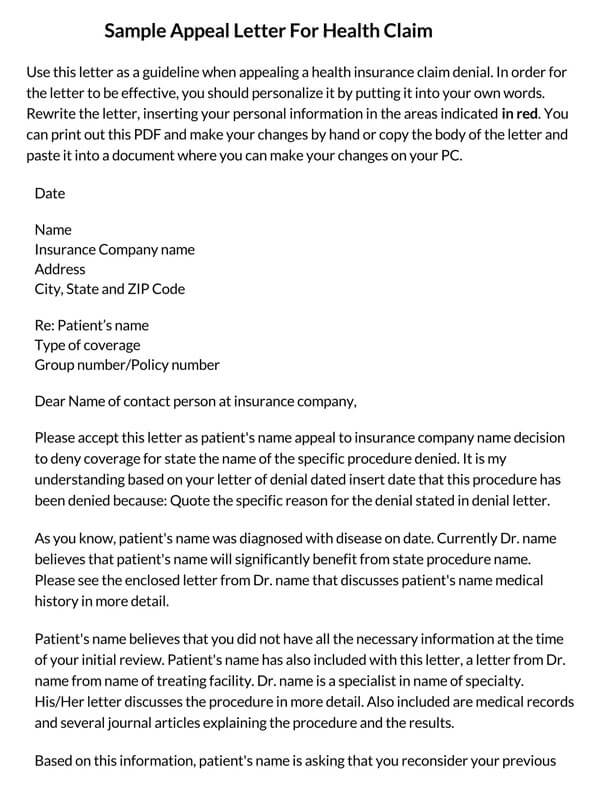 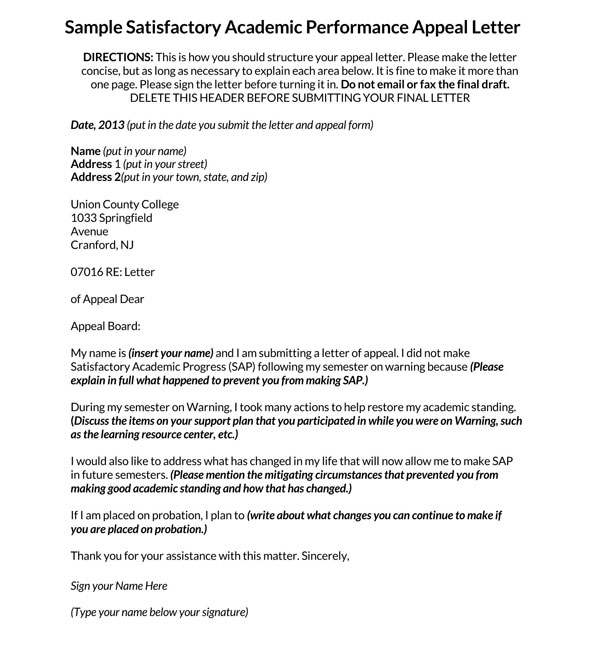 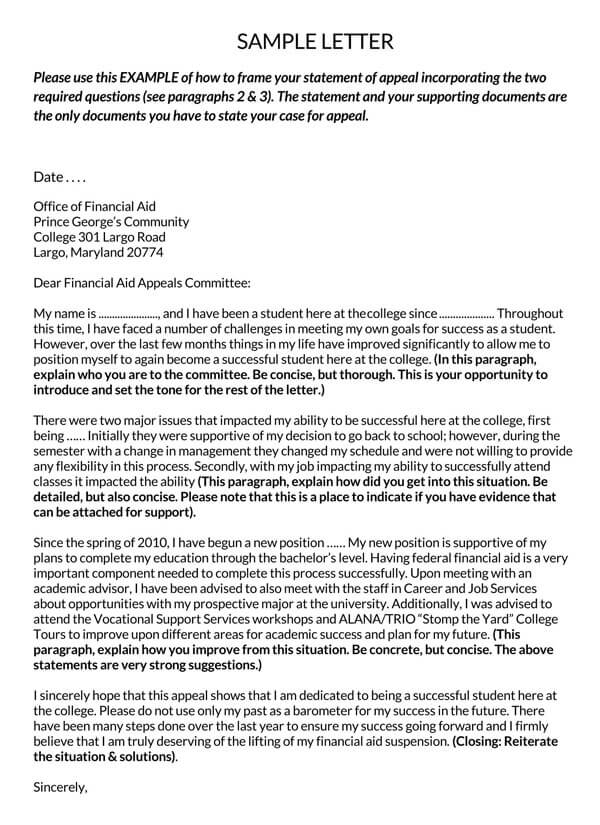 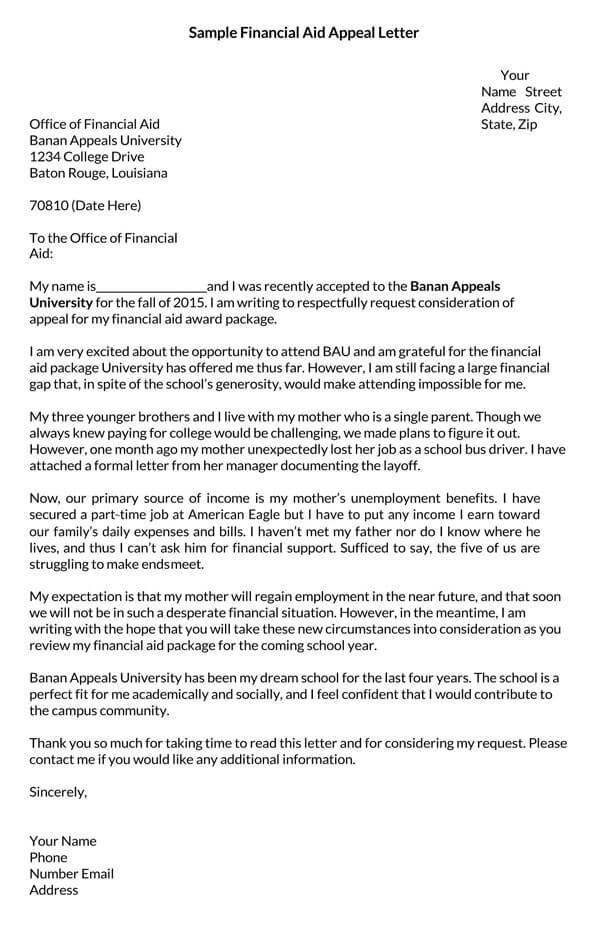 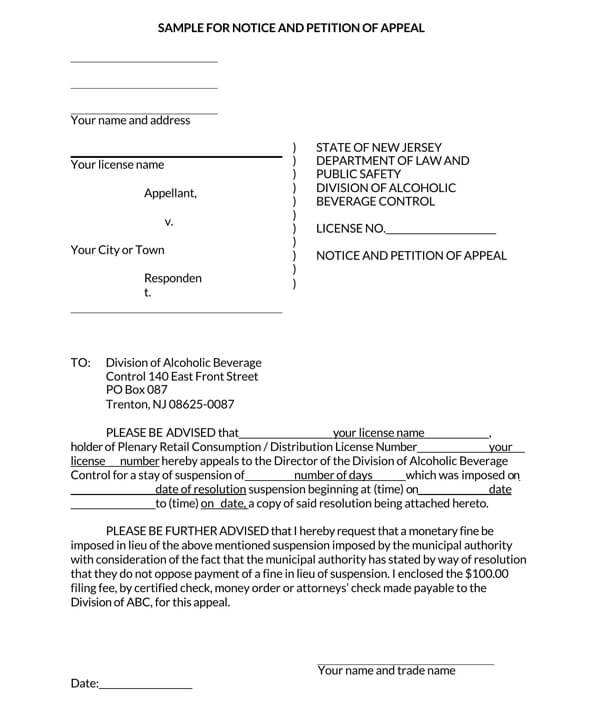 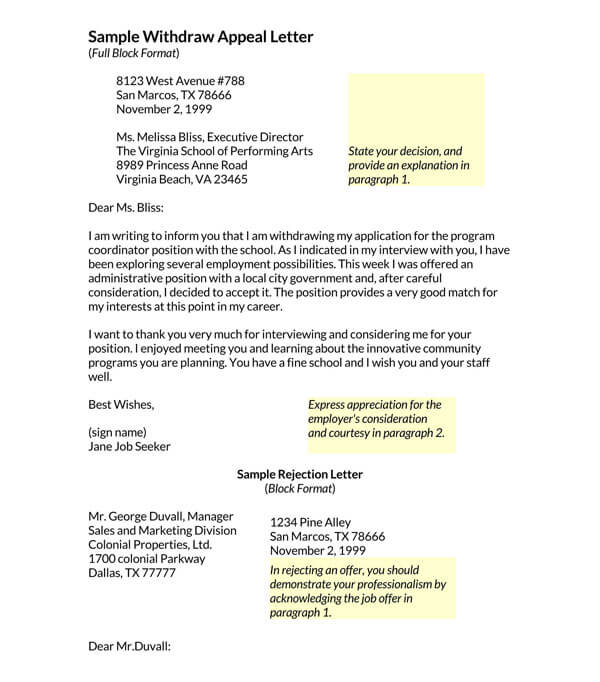 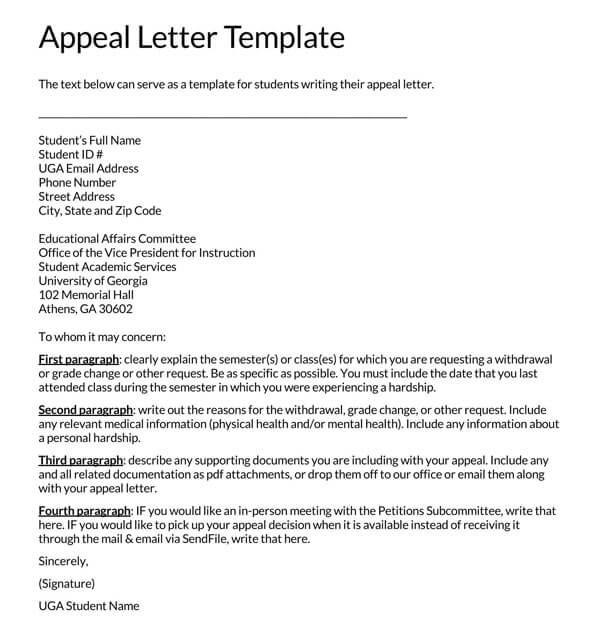 Tips for writing an appeal letter

When writing an appeal letter, you want your case to be considered and maybe a decision to be reversed. To make sure that your letter captures the recipient’s attention, here are some general tips that you should consider when writing:

How long should an appeal letter be?

There’s no restriction on how many pages you use, but it’s a smart idea to try and keep your letter down to 1 or 2 pages. When writing a review petition, the first thing you can do is to create a list of all the reasons you believe the appeal should be approved.

What are the most critical steps that must be taken before you begin to write the appeal letter?

What are the types of appeal?

Many workers are often fined for misconduct or under-performing in their workplace. Disciplinary measures can vary from suspensions without pay to firing, depending on the severity of their conduct. Yet, there is still ground for appeal, and the only way to achieve this is by submitting a letter of appeal. You can file an appeal with an online form occasionally. You should do this if you are told to do so. However, it is strongly advised that the employee write a letter of appeal using the standard professional company design. When writing a letter of appeal for financial help, a letter of appeal, the SAP, or some other form of a letter of appeal it must contain. 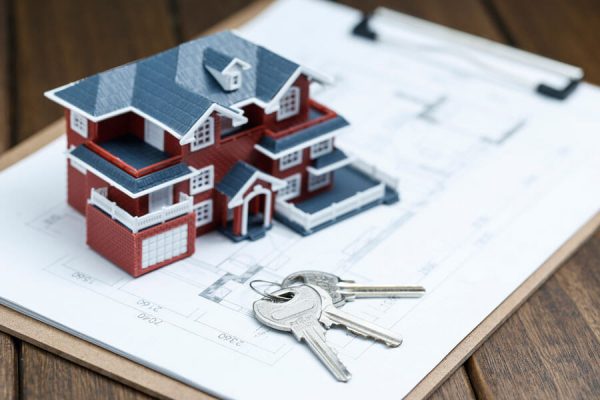 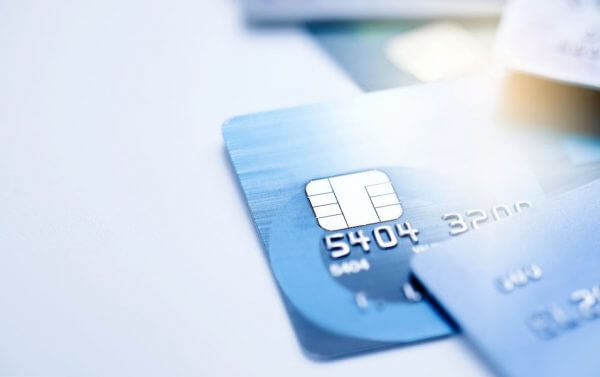 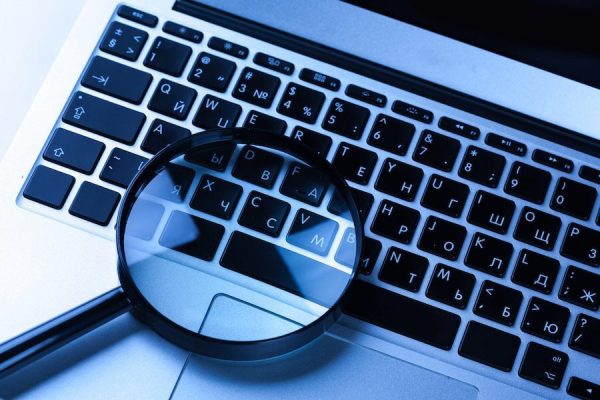 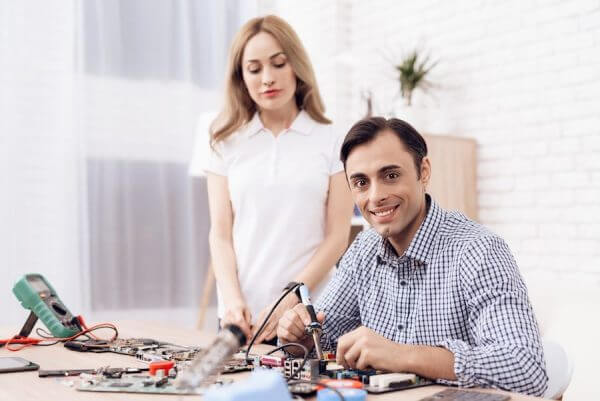 How to Conduct a Skill Assessment (With Examples)