Generally, companies should perform variance analysis annually to compare their estimated costs of a rate proposal to the actual costs for the given period. Variance analysis helps companies and centers determine their variance between cost estimates and actuals annually.

In most cases, variances are computed for both the price and quantity of materials, labor, and variable overhead and are reported to the management. Nonetheless, not all variances are important. Thus, a company’s management should only focus on variances that are unusual or those that are particularly significant. When companies analyze these significant or unusual variances, they can use the information obtained to identify a problem and rectify it if possible, thus improving general company performance.

Variance can be categorized according to their effect or nature of the underlying amounts. Where effect of variance is concerned, there are two types of variances.

The second category of variance (according to the nature of the underlying amount) is determined by the users’ needs of the variance information.

In standard costing and budget control, variance analyses are usually performed when the cost or income variance is divided into sub-variances to establish why there is a difference between the expected costs and the actual results. There are many various types of important sub-variances which include:

This refers to the difference between the actual amount spent on direct material purchases in a given period and the amount total amount that would have been spent if the materials were acquired at the standard price. Direct materials variance is also known as direct materials spending or rate variance.

When a company produces a product and compares the actual labor cost to the standard labor cost, the outcome is direct labor total cost variance. If the obtained variance is unfavorable, it means that the actual costs related to labor were more than the standard costs.

Sales margin price variance can be defined as the difference between the standard margin appropriate to the number of sales planned for a given period and the margin between the usual/standard cost and the actual selling price of the sales effected.

In standard costing, sales margin volume variance is obtained as a result of the difference between the budgeted and actual quantities of a unit product of which the sales mixture is composed, valuing sales at the standard net selling price and cost of each unit of sale at the standard price.

This is the difference between the actual costs for variable overheads and the expected costs based on the standards. The variable overhead total variance is sometimes known as the spending variance.

The Column Method for Variance Analysis

When analyzing variance, the easiest method to follow is the column method, including all the necessary information.

For assistance and easy understanding, refer to the example provided below:

ABC limited produces Fridge guards. Overhead is applied to products depending on direct labor hours. The minimum level of activity is 4030 hours. The company’s standard cost card is as shown below

In the month of January 2021, ABC limited produced 3000 pieces of fridge guards. The fixed overhead budget was estimated at $24,180. The actuals were as indicated below:

Direct materials: 28,000 pieces purchase at the cost of $6 per piece

This is a favorable variance.

Adding price variance to quantity variance, we find a variance totaling to $28,000.

The management should look at this variance because it is significant. They should address why the actual labor cost is higher than the standard labor price and explain why more hours are needed for the production of fridge guards. The column method can also be applied to find variable overhead costs. The format used is similar to the labor format as the variable overhead is applied based on labor hours, as shown in the example.

Budget Variance will be calculated as:

The sum of budget variance and volume variance equals a total variance of $1,600. This is a salient variance that the management may want to consider.

Here are free and customized templates: 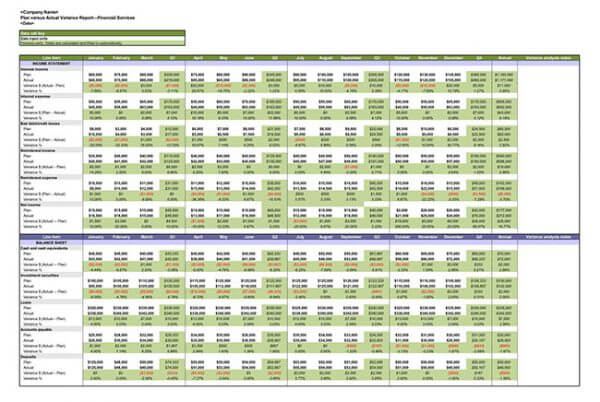 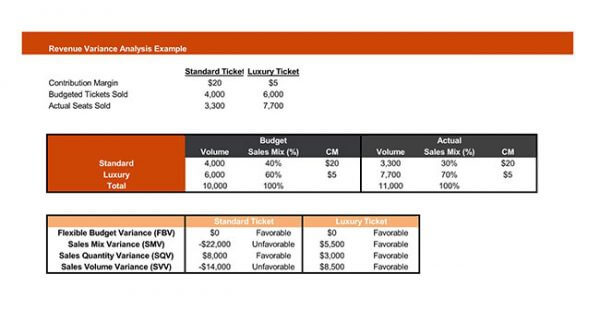 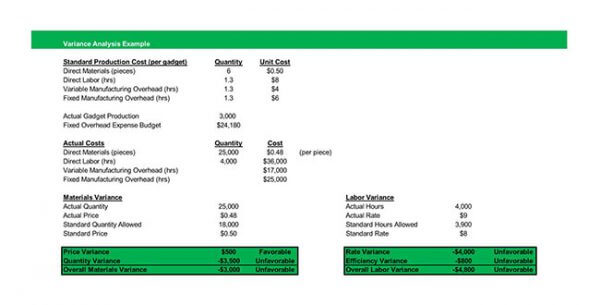 The Role of Standards in Variance Analysis

In Cost and Management Accounting, a standard is defined as a benchmark for measuring performance. Typically, organizations set standards for both the cost and quantity of labor, materials, and overhead needed to provide services or produce goods.

Quantity standards usually indicate how much labor (in hours) or materials (in kgs) should be utilized to manufacture a unit product. On the other hand, cost standards indicate what the actual cost of the labor hour or materials should be. Therefore, in simpler terms, standards refer to the estimated prices or quantities that a company will incur in the production of goods or provision of services.

Generally, variance reports should be due within six weeks of the permitted rate cycle end date. This is true for most companies that perform variance analyses. To develop an effective variance analysis report that the management can use to identify trends, issues, opportunities, and threats to long-term and short-term success, one is advised to consider including these critical elements in the analysis report:

This is the date on which the variance analysis report is based. It should be within the approved rate cycle dates.

In this section, write the estimated cost amounts from the proposal. It is essential to note that the estimated revenue is not required here.

Include the actual costs or revenues for the period being reported. Once you have included the actual costs and revenues and the proposed estimates, the variance dollar figure and percentage will auto calculate.

Variance explanations should be provided concisely while ensuring that the actual variance is addressed.

When a company adjusts its rates mid-year, it can still use the initially approved rate proposal for variance analysis reporting purposes. However, if a material variance occurs due to the mid-year rate adjustment, this should be indicated on the final report.

What is the Variance Analysis Report in Real Estate?

Variance analysis in real estate or property management is the periodic review of actual business results versus the management’s approved budget. The analysis report should indicate the degree of discrepancy between approved budgets and actual results within the reporting period and provide an explanation for the discrepancies.

How do you interpret a Variance analysis?

Variance analysis refers to the quantitative examination of the difference between actual costs and planned costs. Variance analysis can be interpreted using a trendline, which enables a company to detect changes in the variance level, which are more apparent, from time to time. Besides, variance analysis can be interpreted using the difference between the actual and planned behavior, such that the result is a statement of the discrepancies and an interpretation of why the discrepancies occurred. If the actual results are better than the expected results, there is a favorable variance. If the actual results are worse than the estimated results, there is an Unfavorable/ Adverse variance.

How do you write a variance analysis report?

When writing a variance analysis report, one needs to provide a detailed description of the technical events that led to the reported variance. To achieve this, one must provide separate analysis for cost and schedule variances; identify if the variance is usage (that is, more hours required than performed) or rate (i.e., due to rate changes or more/less expensive resources used); and finally, emphasize more on those variances that are unusual or significant.

Why do we calculate variance?

Calculating variance is important as it helps companies compare each asset’s relative performance in a portfolio to achieve the best resource allocation. Investors may also use variance analysis to determine the level of risk associated with certain investments or if they will be profitable.

What is the purpose of variance analysis?

Variance analysis is used to measure the price and quantity of materials, labor, and overhead costs. The figures obtained are reported to the management, which becomes a signaling mechanism, especially when the reported variance is salient. 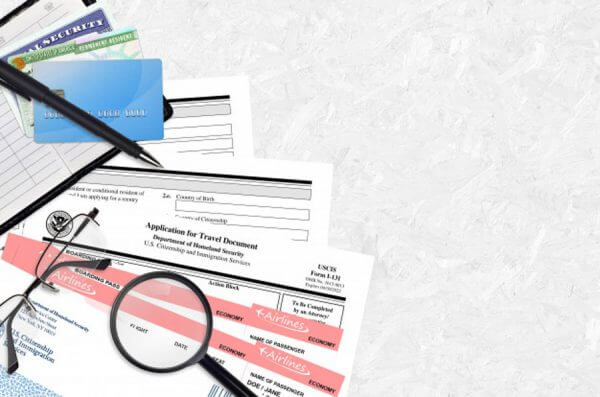 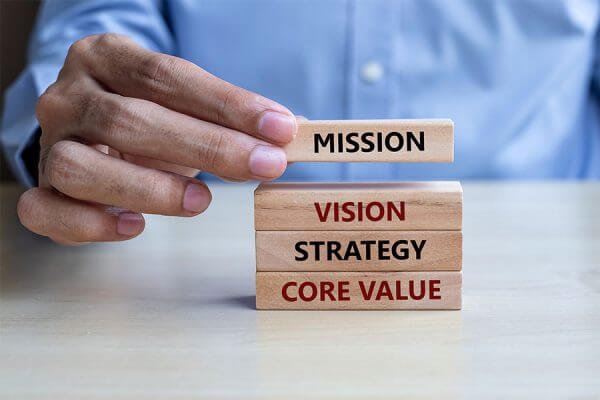 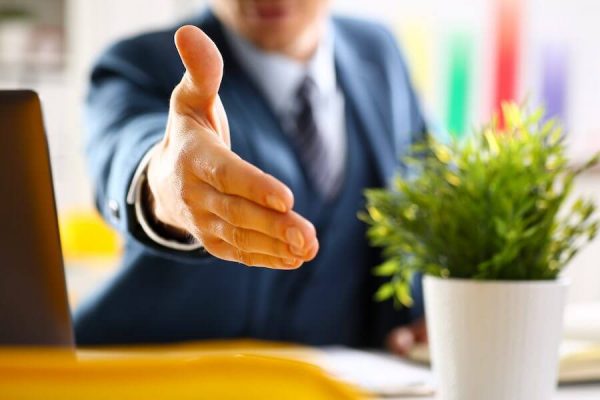 How to Write an Appreciation Letter 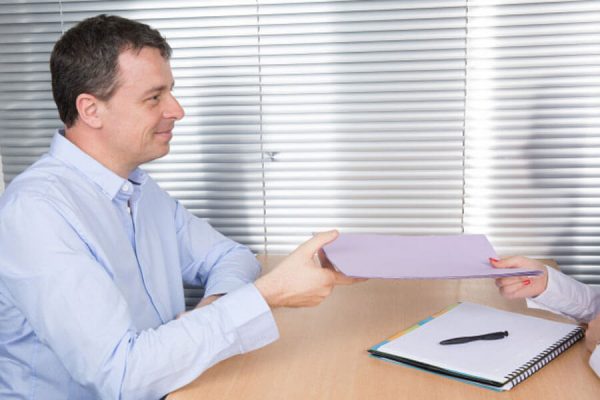