A credit card authorization form is a document that allows a third party to make payments by using another individual’s written consent and credit card credentials. It can either be a one-time transaction or a charge that keeps recurring weekly, monthly, or yearly. This is a common procedure that applies especially when an individual authorizes a subscription that is renewed on a monthly basis. Examples of these include monthly rent, gym memberships, among others.

A credit card authorization form served two basic purposes that play an essential role for both individuals and businesses. To begin with, it authorizes a business to charge a credit card without the buyer being present physically. Second, the credit card authorization form prevents fraudulent and unwanted chargebacks that can affect the relationship between a merchant processor and a business. It is critical because when a business keeps getting a lot of chargebacks, the merchant provides might stop doing business with them.

Authorization letter: A cardholder can write a letter authorizing a merchant to charge their credit card. For the letter to be legal, however, it should contain the signature of the cardholder. The letter should also provide crucial information regarding the details of the card. The rate at which the card is to be charged should also be indicated.

Verbal authorization: This is the least common form of credit card authorization. It only involves the use of words. It is not preferred because it doesn’t count in a court of law. If you want to use it, however, you should record the verbal authorization on a tape. This can be produced as evidence in case of charge backs.

What is Included in a Credit Card Authorization Form?

A credit card authorization form is not a complicated document. Below are some of the details included in the document:

There is always some degree of risk whenever you are making payment through a credit card, and the card is not physically present. To protect yourself against that risk, which includes chargebacks, you can ask the customer to sign a form that permits you to charge their cards continuously. That document is known as the credit card authorization form. Commonly, chargebacks are used to protect consumers against unauthorized transactions. They occur when a customer refuses a charge from your end and requests the bank to reverse the transaction. 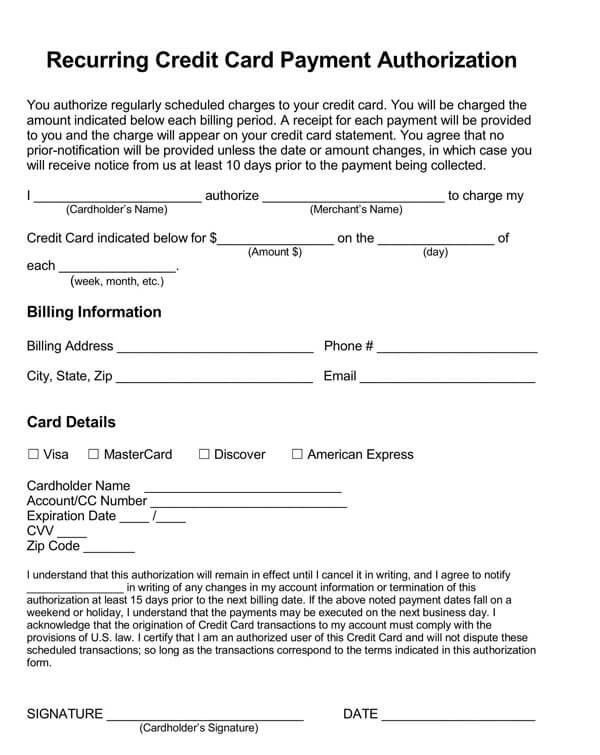 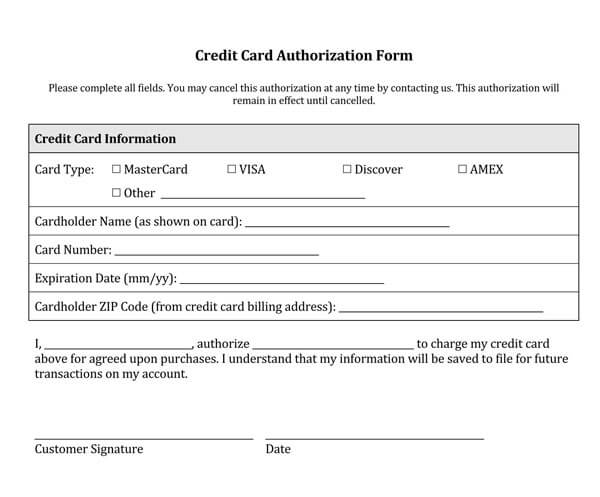 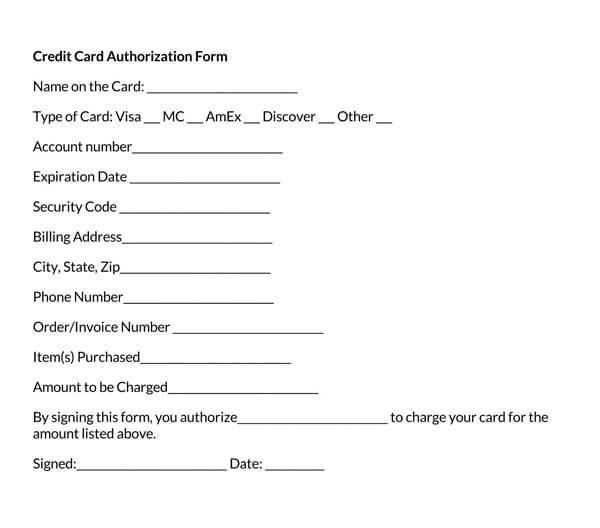 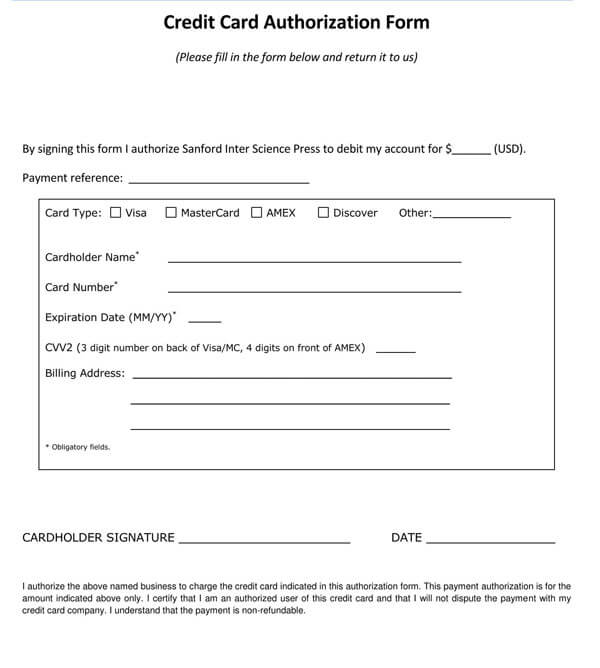 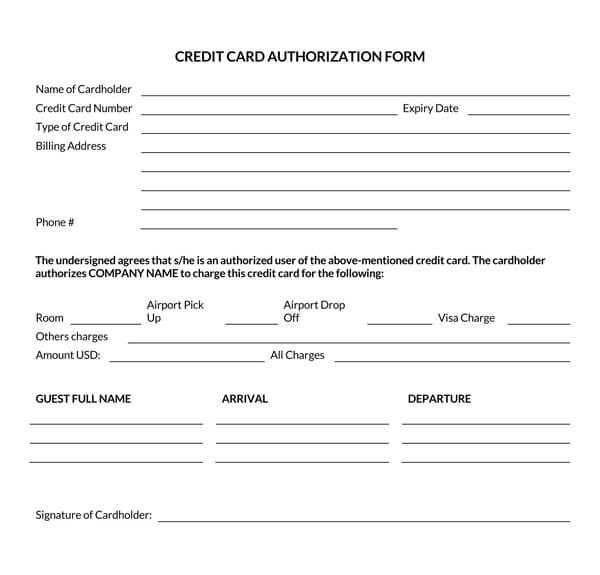 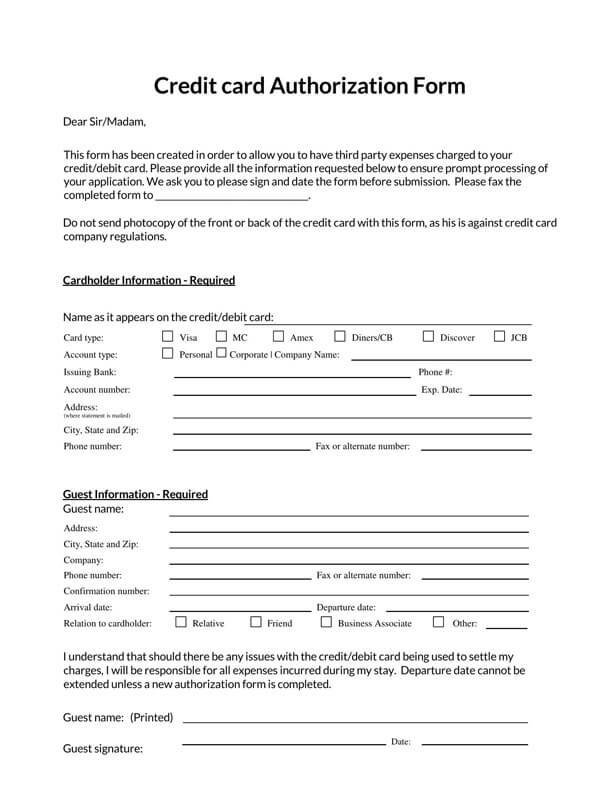 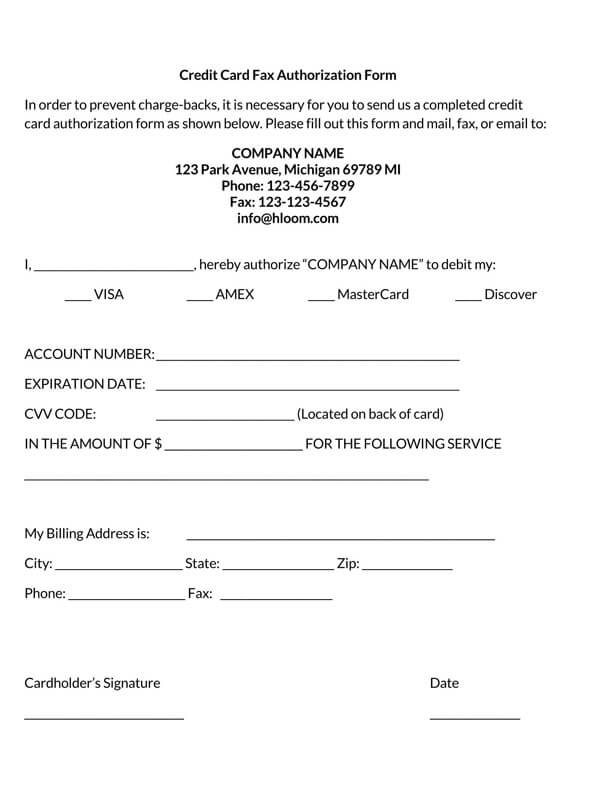 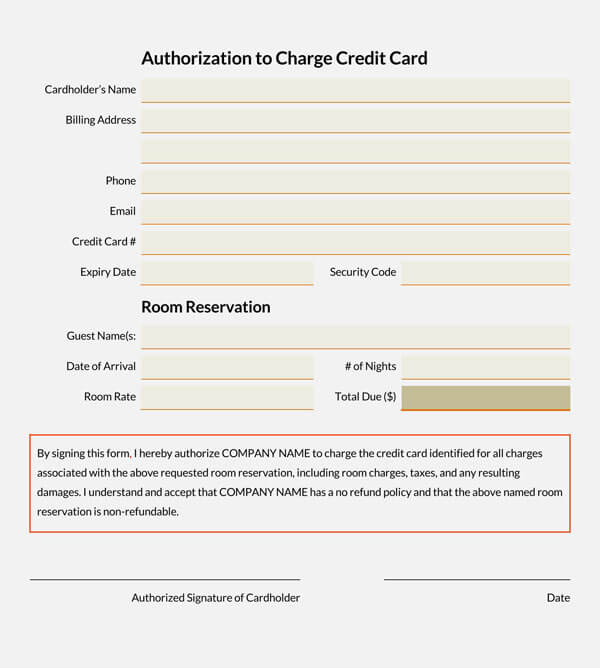 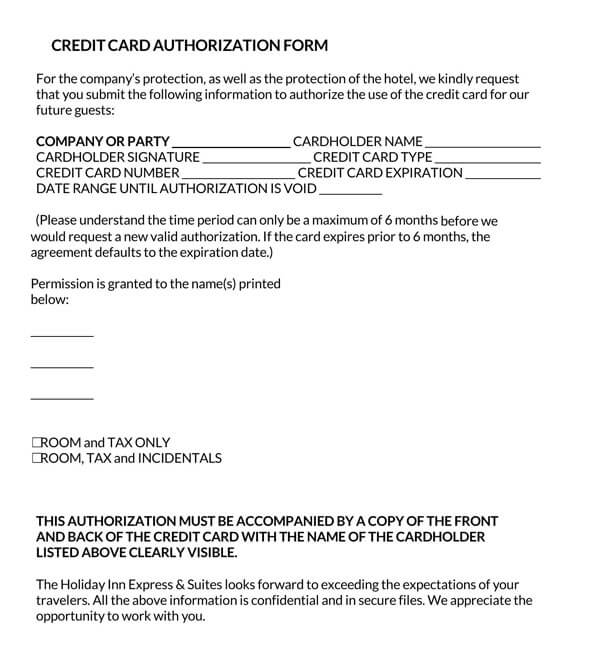 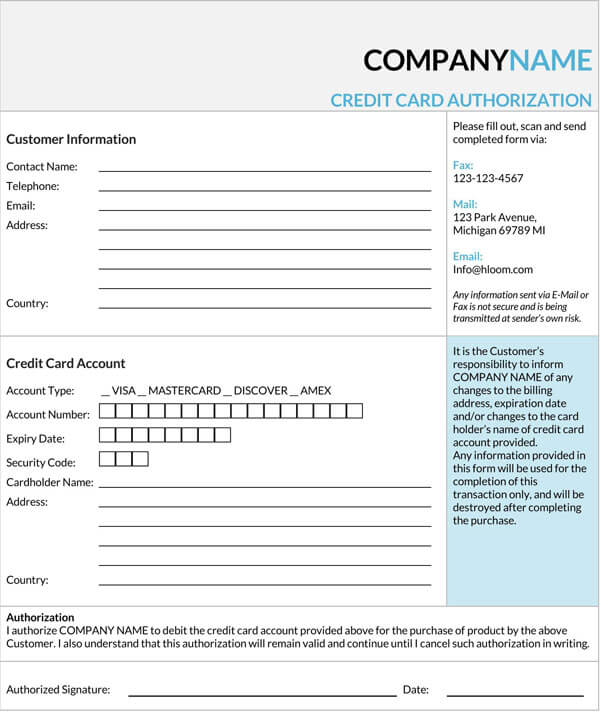 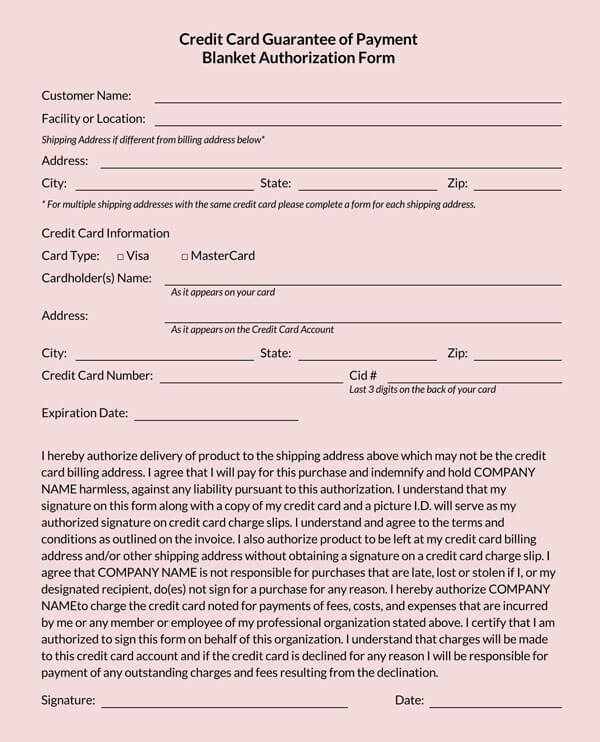 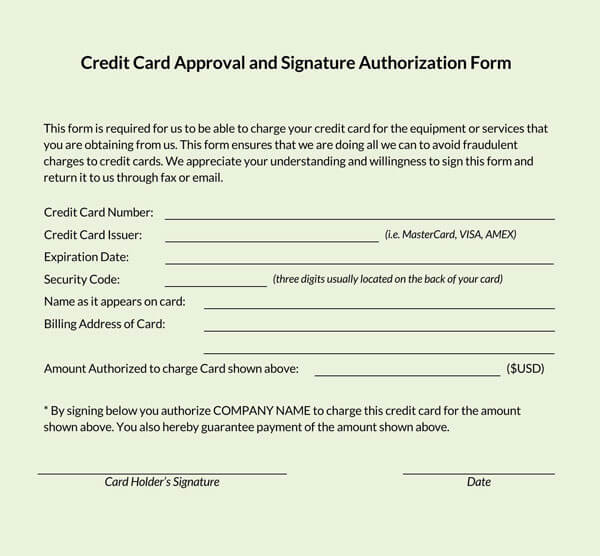 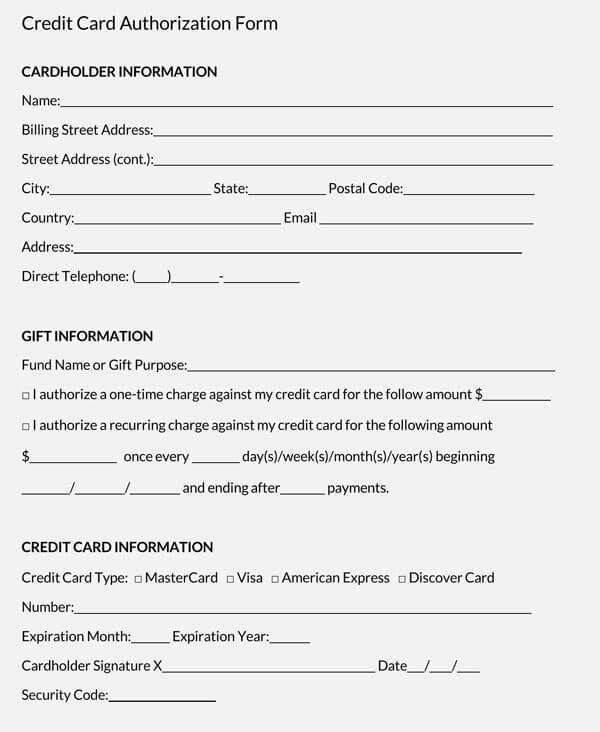 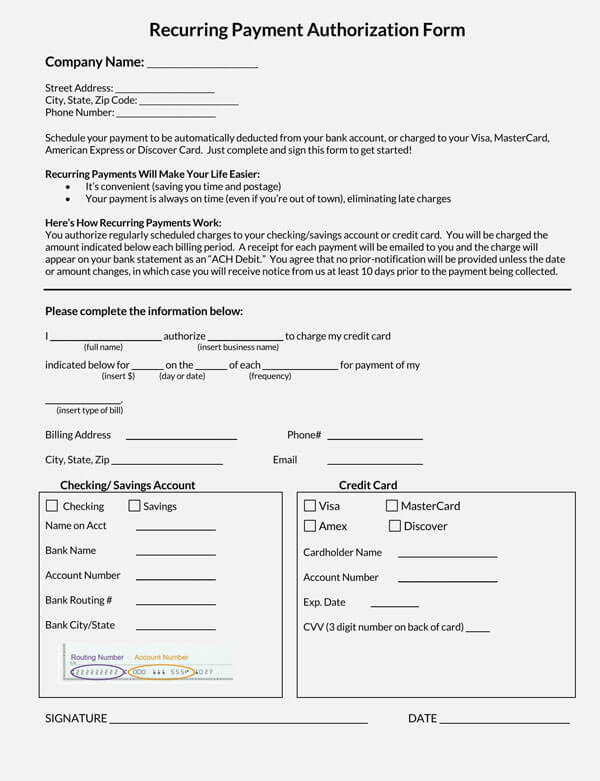 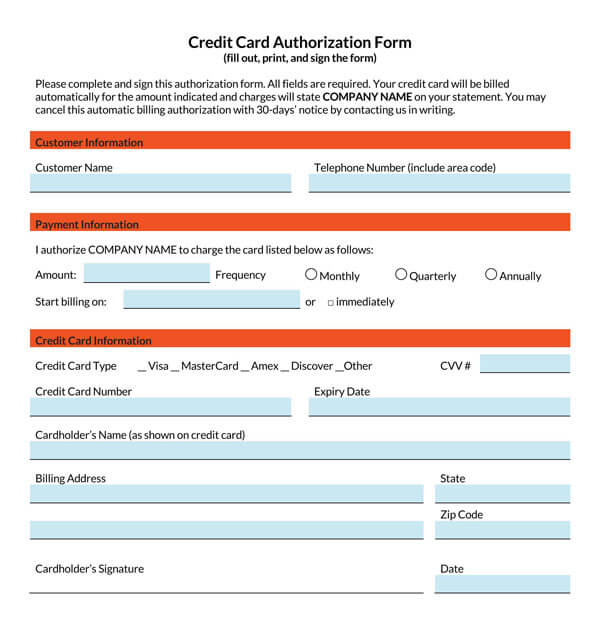 Typically, an authorization lasts 1-90 days. The authorization stays valid until the cardholder clears it or falls off the account.

How do I authorize my card?

Start by setting up a merchant account at your bank or another financial institution. Then, set up a payment processing account. Lastly, register with a payment gateway service.

These forms are a best practice for merchants. As much as it is not legally binding, you should ask your lawyer when they would suggest using one. 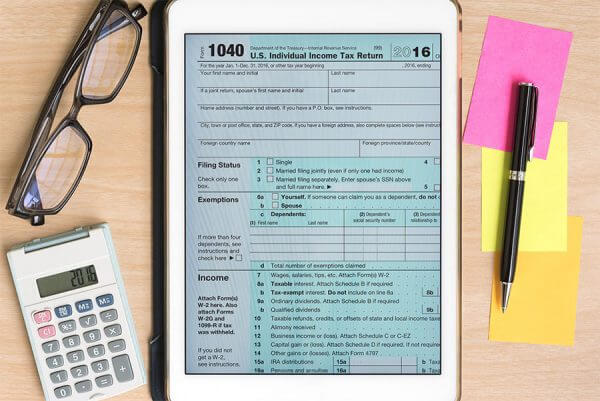 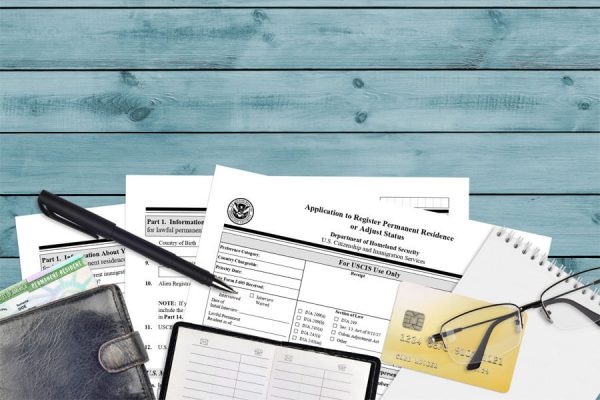 How to Write an Affidavit of Residence Letter 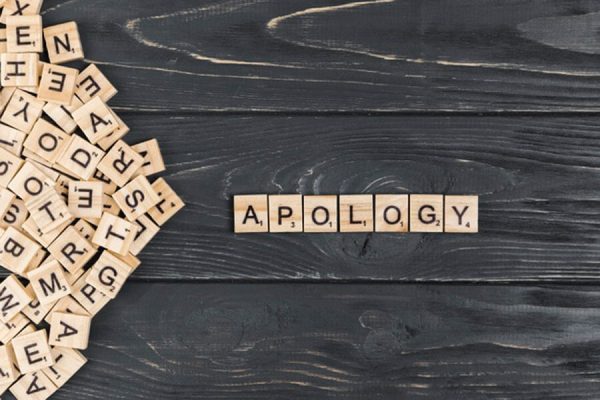 How to Write Personalised Apology Letter (with Samples) 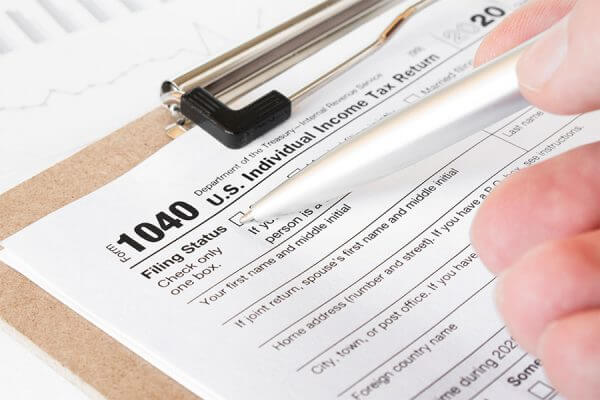